Here is a brief look back at how it all began…

The Yorktown High School crew team traces its history to a kayaking club established in 1967 at the instigation of Gary Adkins and several other students. 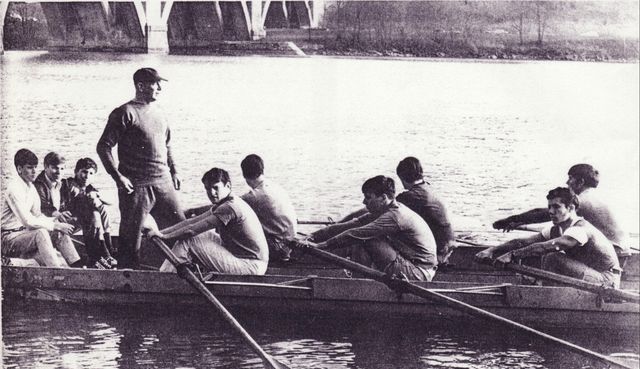 Gary’s brother Tom, a 1960 graduate of Washington & Lee who rowed at the high school and in college at Cornell and American, had started a girls’ “crew” team at W&L in the mid-1960s although they actually used kayaks because girls were not allowed to row in high school at the time. Spurred by this, Gary showed up at Yorktown’s club day in 1967 with several wood kayaks and recruited interested students.

Working with fellow 1968 classmate Pam Stewart, the new club’s secretary/treasurer, and Scott Merritt, the team’s first captain, the students convinced Pam’s father, Bill, then the president of the Potomac Boat Club in Georgetown, to support the burgeoning interest in crew at Yorktown, which had just opened in 1960 and only graduated its first class in 1962. In the summer of 1968, the first YHS crew team—totaling just 18 boys—received a brief introduction to rowing at the Potomac Boat Club under Coach Stewart, using a borrowed shell and the W-L barge. Among those known to be members of that first team were Bob Brambilla, Jeff Brooks, Gary Carson, Dave Fitch, Bill Hawkins, Marshall Knudson, Mark Malloy, Jim Massey, Todd Merritt, Scott Merritt, Mark Mills, Paul Napier, Jim Pecore, Larry Quermyer and Rick Snead.

With space at the Potomac Boat Club at a premium—W&L’s highly successful program and J.E.B. Stuart’s were already housed at the club—Yorktown’s fledgling team reported to Thompson Boat Center in the fall of 1968, where practices were held in the barge and the team’s first shell, the Challenge, which had been purchased from W&L by the club’s newly formed booster association. Significant help was given to the new team by W&L’s legendary coach, Charlie Butt, as well as J. Elwood Clemens, the county sheriff at the time.

That first crew rowed in both the Northern Virginia Championships and the Schoolboy (now Scholastic) National Regatta, which were both held at the Potomac Boat Club in the spring of 1969. By the end of the season, the team had purchased a second used boat, the Spirit, from Fort Hunt as well as a launch and motor, and the team was on its way. The team’s first new shell, a Pocock 8, was purchased by the boosters in 1972.

The Yorktown girls’ team was established in 1975, and won two medals in the Northern Virginia championship regatta their first year in existence. Two female coxswains, Julia Edelman and Liza Wheaton, had already blazed the trail, becoming the first women in the D.C. area to cox a varsity men’s boat in the early 1970s.

Success has followed since.  In both 1985 and 1995, women’s teams won gold at the scholastic national championships, and since 2007 the team has hauled in six medals at the Virginia state championships as well as two top 10 finishes at Nationals.

The men’s team has been similarly successful, particularly since 2007, with 13 medals at the Virginia state championships including the team’s first-ever state gold medals in 2009 by both the 1st and 2nd varsity eights. In addition, the men finished in the top 10 nationally in 2010.

If you have information about the early years of Yorktown crew, please contact us.